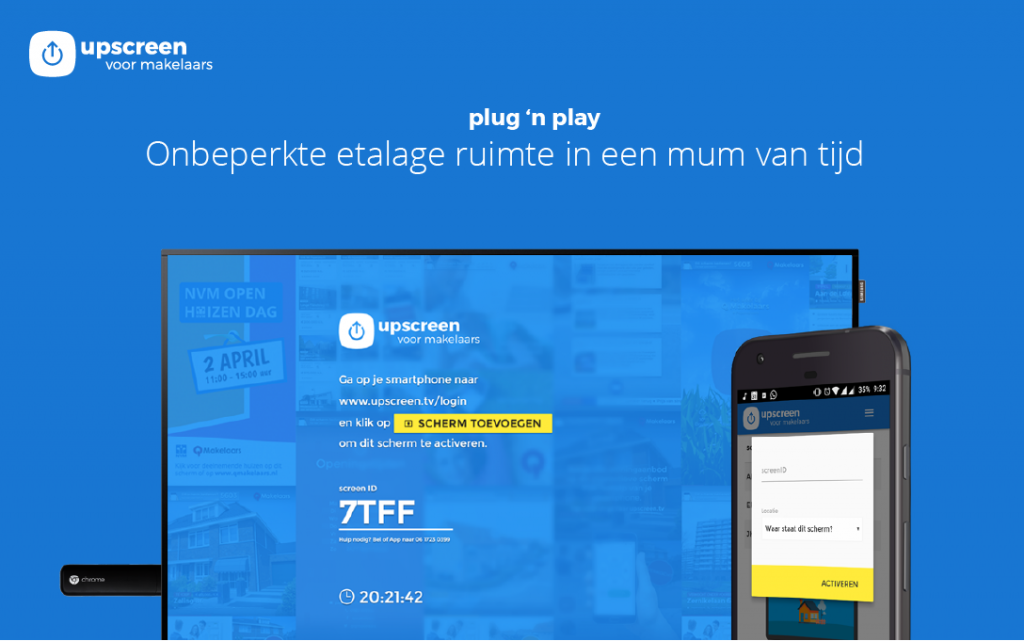 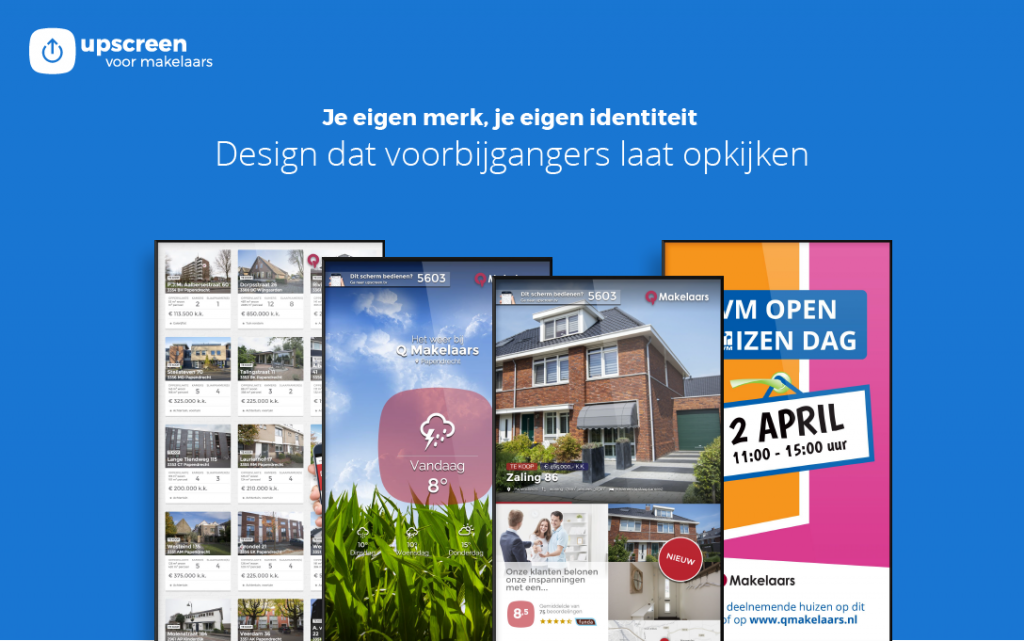 Upscreen set out to change window advertising in brick and mortar stores and public displays. Traditional window advertising is static, a one way street and only offers a glimpse of what’s on offer.
Upscreen tried to change this, allowing for bidirectional interaction upon the first customer touchpoint. With NFC, Bluetooth Beacons, QR codes or a simple PIN-code Upscreen provided unparalleled interaction between Digital Signage Displays. Passersby could use their smartphones to establish a link between them and the advertising screens, giving window shoppers control over what is shown on the big screen.

Our goal was to create a magical experience upon the first customer touchpoint. A simple interaction, tap, scan and gain control over the signage display.

1. Fast and easy to use for everyone regardless of smartphone OS.
2. Give passersby an opportunity to control whats shown on the big signage screen
3. Lasting engagement with our product even after leaving the premise of the signage display

As a UX / UI Designer i designed and co-led the launch of Upscreen’s first interactive signage displays. Researching familiarity of and how people interacted with new tech such as beacons, NFC and QR codes I laid down the foundation for a number of variations of the design and tech stack.
Working in small bootstrapped startup means wearing a lot of hats at the same time: Besides UX / UI Designer, I took on the role of Researcher and Prototyper.

First we set out to discover ways to interact with a digital signage screen. Touch through glass foils and camera / gesture based setups came with high initial costs or proved to be cumbersome and awkward.
Having a state of the art touch screen in your pocket accompanied with great apps has raised the bar of expectations tremendously for how touch screen interactions work.
Since most of us already carry a smartphone in our pockets, why not use these? Without complicated hardware requirements we could drastically reduce the costs of installations and turn any existing screen into an interactive screen without or with small hardware add-ons.

We tested a number of setups in the lab and public accessible locations. Early test focussed on pairing the participants smartphones and the Signage Displays. The methods and tech used to setup the connection we call portals. The biggest challenge was in finding a method that could be used by both iOS and Android users and whether or not we could go without rolling our own app.

Bluetooth Beacons did not provide a platform unifying experience. Apple’s iBeacon and Google’s Eddystone set out to do things very differently.
An iBeacon needs a special app and Eddystone combined with the Physical Web provides the only cross platform experience, though the Chrome browser ( Default on Android, small user base on iOS) is required.
Exploring the Physical Web and thus being able to interact with Upscreen enabled Signage Displays required digging deep in the settings menus. Users were not able to do this without assistance. Furthermore, the Physical Web Notifications are passive, which requires users to keep an eye on their phone and wait for the notification to show up. Alternatively on Android we could have opted for Nearby Notifications.
Another pitfall with beacons is that the user is required to have bluetooth on in order to pick up the beacon signal, though this could have been made a requirement if we built our own app.
Update: Chrome has removed Physical Web support on iOS and Android, Nearby Notifications are still being supported and seem to be the flavour Google has settled for.

While providing the only true tap & go experience, using NFC proved to be problematic at the time. The iPhone 6 came with a ‘closed’ NFC chip keeping third party apps away from the phone’s NFC capabilities. NFC chips on Android were only found on flagship phones. Tapping one’s phone against the window brought a unanticipated distracting knock on the window for shopkeepers and finger print smudges on the window. Being a bit of a novelty, NFC interactions seem to attract tech aficionados.
Update: with iOS 11 Apple has opened up the NFC chip for third party use, on Android NFC chips can now be found on phones from 100 Euro’s|and up.

The unappreciated hero. Basically every phone with a camera can scan and decode a QR code. The code itself is printable and when displayed on a screen it can be updated dynamically. Most participants in our test panel were familiar with the QR code and knew ‘It does a thing on your phone’ and that you could scan it. Without any further explanation numerous participants took photo’s with their camera app of the QR codes provided, only to be disappointed that nothing happened. For those using a dedicated scanner app the experience was flawless.
update: In iOS 11 the standard camera app can now scan and decode QR codes. On Android functionality fluctuates depending on vendor specific camera apps. Numerous other apps have started to use QR or similar codes. You can now add friends on Snapchat & Facebook Messenger by scanning proprietary codes. A number of mobile banking solutions have adopted QR codes for payments. I imagine people start to associated 2D codes with specific apps, instead of being a universal link to something on web.

We provided participants with a shortened URL that would give them instant access to the Digital Signage Displays. While this works, it requires a lot of focus and motivation from the end users as shortened urls are not optimised for human readability, but optimised to save you some characters on your tweets.
update: URLs at the end of a tweet do not count towards the character limit, tweets can now be 280 characters long.

We provided participants with a short well readable url accompanied by a 4 digit pin that had to be entered upon visiting the url to gain access to the Digital Signage display. This solution proved to be simple and well understood.
update: This method has become widely know and has been popularised by products such as Kahoot!  Pairing your Google Chromecast or Apple TV with your phone use a similar method to link the devices.

Without clear signaling people would look at the screen, but not interact with it. Signaling of possible interactions proved to be a challenge. The principle of proximity requires us to put instructions, the signage display and the portal close to each other.
For NFC we put the instructions on the NFC tag itself. This resulted in either small print due to the small size of the tag or an additional marking of the spot of the nfc tag on larger prints.
Furthermore we had to ‘tell’ the NFC print belonged to the Signage Screen and vice versa, creating an unpleasant  look, confusing loop and an overall poor design.
With the PIN and QR code the instructions and portal could be grouped on the Signage Display itself. Having the instruction and singling on the display itself it allowed us to tailor the message and find an optimum between wordy instructions and short concise commands, thus leading to people-friendly instructions.

The first design iterations put a lot of emphasis on interaction. As the divide between lookers and those that interact heavily favours the lookers we settled on creating a hybrid system: A mix of traditional digital signage with a layer of interaction on top of it.
SHARE
Tweet